12
Random Thoughts On The Ship That Is Delena In The کتابیں & TV Show.
posted by WonderlandKills

L.J.Smith felt that Damon and Elena as end game felt right...
Me, like most in the Vampire Diaries fanbase ship, ship the couple that is Damon and Elena, یا as it's known, Delena. I have to admit to myself, I didn't always ship Delena, although looking back at the times when I didn't, I laugh. When The Vampire Diaries started, I was just becoming a teenager. I didn't understand everything, I didn't know یا want love as I do today. I'm still young, I haven't experianced love, and I think it might be a while untill I truely do, but I was starting to becoming a teenager when the دکھائیں started. I hadn't looked into the Vampire Diaries that much, and I thought the main couple was Stefan and Elena, also know as Stelena, and I thought the bad guy in the دکھائیں was Damon. I thought he was the true vilain that most shows had, and I didn't like what he was doing to Stefan and Elena. I wanted them to just be left alone and be happy, although there was never this want یا care for the aspects of their relationship. I watched the first five episodes and when Damon was put in the basement, I was happy, and I thought that Stefan and Elena would be left alone. As the episodes continued, I didn't find myself caring for Stefan and Elena at all, and I was drawn to the character that is Damon. I didn't like him, but he made me curious, and I knew that there was مزید to him. I began to think he was okay, and I began to like him. While I was doing this, I did not care for Stelena at all, I found the relationship between them dull and boring, but I didn't ship Damon with Elena yet, I was still studying the character of Damon. I remember that I did not like the love scene between Stefan and Elena, I didn't think it was right. I realised I hated Stefan and Elena together, I knew their relationship was rushed and unrealistic, and I knew that I could never ship them. When Bloodlines came along, I was an offical Damon and Elena. Seeing them together gave me butterflies in my stomach, when they saved each other, and I found that this was the couple that would work. Damon brought out this side to Elena that Stefan never had, this fun, happy Elena. It made perfect sense to me as a twelve سال old. They would be مزید happy together, so why not them? I shipped them from that episode, and when she went back to Stefan and kissed him, I couldn't keep Delena from my mind, they just worked, and Stefan didn't. Throughout season one, I begain to loathe Stefan and Elena, hate them. I was always thinking about the scenes between Damon and Elena, and I saw that one scene with them had much مزید meaning and love than any Stelena scene. Over time I realised that this vampire, Damon, had a human side to him, and Elena was bringing it out. When they were together, I never saw that Damon thought Elena was Katherine, I never got a hint of that. They made sense to me, and I wanted them to happen. As I turned thirteen and got older, I began to be مزید keen, looking deeper into their relationship and their dynamics. I remember feeling joy when it came to Miss Mystic Falls, although I became confused when Elena seemed to take Stefan back so easyily. When it came to the season one finale, I was begging for them to kiss, it felt right, and I knew that Damon had feelings for Elena, and I knew that Elena cared for Damon. In the break between the first and the سیکنڈ season, I still had Delena on my mind. I was rewatching old clips. Throughout the سیکنڈ season I watched as Damon made these mistakes, but it made me love him more. It just proved that he isn't perfect, but there is a reason, he was a true character that I loved. Sometimes I didn't respect him for what he did, snapping Jeremy's neck, feeding Elena his blood, but I understood why in the end, and I forgave him, like others should. Then came 2x08, and I almost cried. Damon loves Elena so much, but he believes he does't deserve her. He tells her the truth, and then, completly selfless, he makes her forget. This proved it to me and everyone, this relationship isn't a stupid teen relationship like Stefan and Elena, it was a true love. This continued throught the سیکنڈ season, and then came the finale. Damon tells her he loves her as he's dying, and mention's all the bad things he's done, all of them. And then Elena says it, 'I forgive you' This meant everything he's ever done, ever to hurt her, and she tells him she likes him the way he is. I almost cried at this point. The relationship has been two seasons, and it's not rushed at all, it's developed. Elena is growing up, and as she does, so will the love, it won't be a silly teenage romance, this will be true love.

Damon and Elena work for so many reasons, it's hard to understand why people cannot see this, mostly Stelena and Bamon fans. L.J.Smith was fired from writing the کتابیں because she wanted Damon and Elena to spend the rest of their lives together. Their was one, key, huge reason. It felt right. Stelena didn't, Bamon didn't, Delena did. They say آپ should always follow your heart, and L.J.Smith wanted to do this. If something feels right, it's following your heart. Damon and Elena were right, they were from the heart. L.J.Smith کہا that writing Damon and Elena was her favourite thing in the books, once again because it felt right. Bonnie and Damon care for each other, but it's not true love. Damon cares for Bonnie, and Bonnie cares for Damon, but this isn't love, Delena is. In the books, Elena makes Damon want to be this better person, and when he was dying, Elena realised how much she loved him. Even Stefan realised this, he told Elena that he was sorry from keeping Elena from Damon, because he never realised how much they loved each other. This ghostwriter cannot hide from this. L.J.Smith basically confirmed that they would be together, but the ghostwriter is going to change this. It won't work, they can't just erase that, and a part of me thinks that they can't end it as Stelena, because it's basically confirmed that it will be. The thing that we all want to know, what keeps us reading the books, is who will Elena be with. Damon and Elena won't just end there, there's something مزید to this story, something مزید to strictly Stelena books. This isn't the end for Damon and Elena in the books. I have faith in this, and I have faith in Damon and Elena. True love will always pull through. Stefan and Elena have always been rushed in the books, at first, Stefan saw Elena as Katherine, and Elena was a queen bee, who wanted who she wanted. She just wanted Stefan, because of his looks, not for him, not as she has grown to love Damon as. Elena loves Damon for him, it's not just an attraction thing, it's so much مزید than that. The one thing that I think should happen that would keep the Vampire Diaries spirt up between the love triangle, its for Elena to lose her virginity to Damon. We all know that Elena is a virgin, and for her passion for Damon, it would make sense for her to first make love with Damon. If the ghost writer wants us D/E شائقین to still read, I believe that if anything, this should happen. If Damon would make love to Elena while she was 'with Stefan', this would make another dynamic to the series. It would make sense to add Damon in somehow سے طرف کی doing this. If the ghost wrtier wants to keep some D/E fans, this is how I would want it to happen. Damon and Elena has to stay in the books, یا it wouldn't make sense, so their reunion should be like this. No, I don't think the new ghostwriter would do this, seeing as they will be concentrating on the Stefan and Elena realtionship, but I believe that if this would happen, it would add dynamic to the new writer, instead of just trying to take other and write a new plot. If Damon and Elena were not to be end game in the books, there last moment together as this, would be beautiful, and I suppose, as long as they were end game in the show, it would be an almost acceptiable way to end their relationship. Although I believe it isn't the end for them in the books.

I know my thoughts are random, I just felt like I needed to get my thoughts out, and even my story on how my love for Damon and Elena is. Damon and Elena in the TV دکھائیں and کتابیں is something that will always be bigger than anything else involved in the series, although the other characters is important. The sad realtily is, even though it may never happen, is that I want to be in love with someone like Damon, I want my love to be like Damon and Elena. I don't want someone who's perfect, i just want someone who loves me, and I want them to make mistakes, because I believe that in a relationship, that is KEY. I want them to make mistakes, but through this all, do anything for me.Damon and Elena are the only thing that make sense, the love between them. If the ship goes down, I go down will them. They are a fictional couple, I understand that, but they are the most realistic one I've come across, which is why I love them. 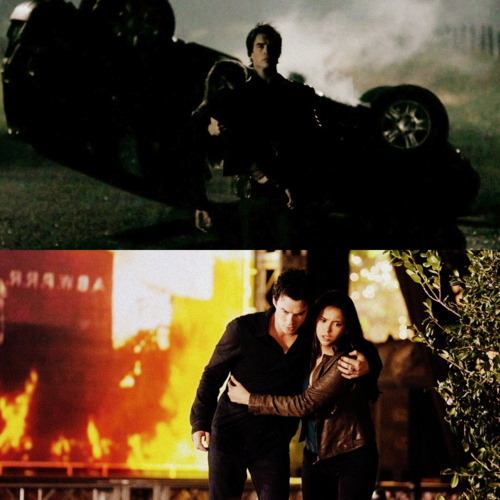 I first fell in love with Delena in Bloodlines, and it's lasted till the end of season two, and it's still going strong.
missdaytona6, TheExcorcist and 10 others like this
HaleyDewit Wow! I love this article!
WonderlandKills Thank you :) x
20cosmogirl i don't hate sfefan and elean together, i just like her elena better with damon. delena
Delena01 This is a really great article!! I love it! :)
WonderlandKills Thank you guys! :)
Mannefik THIS > "They are a fictional couple, I understand that, but they are the most realistic one I've come across, which is why I love them." Great article. I love it & the quote above.
WonderlandKills Thank you :) x
Delenafan2 Awesome article!! Very profound. You're so right in your reasons for why Damon and Elena belong together and I agree.
WonderlandKills Thank you :) x
paupaug Really good, i gave you a prop for it ^^
WonderlandKills Thank you! :) x
delenaloverx7 Great article! When I first watched the show, I was a Stelena shipper & I hated Damon. But like you I began to become interested in him. Even before I liked him, I thought he was a funny and interesting character. As I kept watching the show, I began to like Damon more but I still shipped Stelena. Then something happened and I began to ship Delena. Now I will never ship Stelena again because like you said, Delena are more realistic and more like true love. 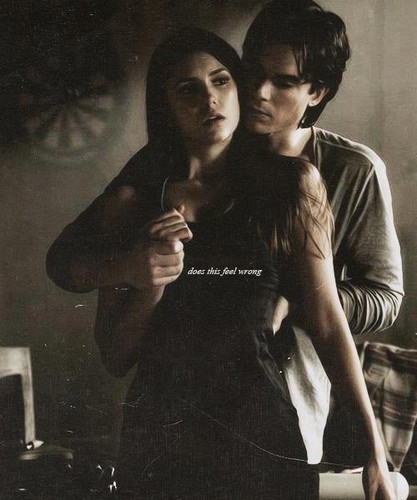 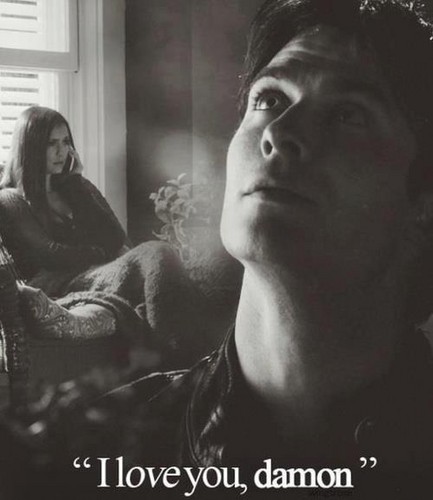 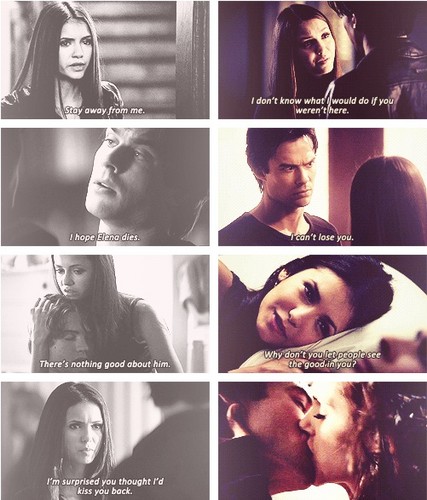