2
The Cursed کارتوس, ٹونٹا of Majora's Mask
posted by Holyshitwtf
It all started when a young man without much money he was دیا a Nintendo 64. The young man, who wanted to play but did not have the fat wallet, decided that a good option was to buy cartridges. And I was lucky because just the دن after آپ give away the console, an old man opened a گیراج sale in which, between furniture, lamps, utensils, carpentry and other unnecessary objects, calling his presence a small کارتوس, ٹونٹا of Majora's Mask ( a game of the series The Legend of Zelda). As the old man who sold the game ... well, let's say that her appearance did not inspire much confidence to the boy was something a little strange and sinister in his face, in some of his gestures and especially in gazing into the infinite his small black eyes ... Despite that, after asking if it worked the boy ventured to buy the cartridge-old and a bit worn, black and named "Majora" written with permanent marker red-blood-the old man. Do not worry the rare appearance of the game: thought this was due to eccentricities of its former owner ... who knows? ... Maybe it was one of those extravagant Gothic ... So, the guy takes the کارتوس, ٹونٹا without suspecting that this would the beginning of a long nightmare. When the boy started the game, he realized that it must be a beta because they had small errors in the textures: nothing major, other than that everything seemed fine. Besides there was a fairly advanced file (but not finished) under the name "Ben" but the boy wanted to start from scratch so I created a separate file that named his character as "Link". When آپ start playing believed that everything would be normal until, having already advanced in history, ultimately realized that the game programming made without explanation یا logical pattern perceptible, sometimes appeared the name "Ben" and other the "Link". The boy, who knew something about computers, thought this was due to some weird bug and decided to خارج the file to see if Ben had the problem. It happened just the opposite: things started happening even مزید rare, chilling in some cases. Began dating موسیقی backwards, dialogues appear very strange things happen outside the normal fabric of the game, glitches arise, macabre laughs background, etc. And all this repeated, returning again and again ... But worst of all came when the game was reset and only created a file called "Drowned" ('drowned' in Spanish). It was there that Skull Kid (the game's main antagonist) was started appearing all the time, killing him instantly every time it appeared, was from there that he began appearing Link contorted in demonic positions equal یا مزید than that out in the film The Exorcist. Even Link came to appear so gloomy as a dying drowned zora (when Zora can breathe underwater ...). All this was disturbing and sometimes frightening for the guy who bought the damn cartridge. He thought about quitting, wanted to leave but could not because of curiosity and fascination as sinister visions anchored to those who paraded across the screen. Enjoyed yet felt the anguish of seeing disturbance the name "Ben" again and again with Skull Kid, among horrendous laughter and موسیقی background inverted, so ruthlessly murdered. "Fortunately," the boy reached a point where I broke down and decided to see the old man to tell him who was that such Ben. But the old man was not, had disappeared along with the جوابات that he could get. Desperate, he went to find out from the neighbors to see if anyone knew where the old man had gone into effect and if he believed he lived where he lived. And yes, living in the گیراج and the house, he was told, was a very strange and somewhat hermit, a man who rarely saw it as almost never left the house. Unfortunately just as he had left it had sought but far to wait again, flew into anxiety and asked Ben. The answer he received marrow froze: Ben told him he was a boy living in the house where the elderly live now and eight years ago, Ben had a terrible accident in which ... he drowned ... It is کہا that the boy in the story I have told is still living in fear in the blood, that never again played Majora's Mask, who is afraid of getting sea, sometimes dreams that Skull Kid is murdered and کارتوس, ٹونٹا sold the book to someone who asked his identity secret ... Go God to know who the کارتوس, ٹونٹا holder and how fucking crazy (including the one that has told the story) would give a good amount of money for the black کارتوس, ٹونٹا of letters Red. In any case, I leave the ویڈیوز that have been leaked on some of the things that are in the کارتوس, ٹونٹا of Majora's Mask damned:
deathding and OkazakiDaisuke like this
10
Things آپ learn from horror فلمیں
posted by haliethefangirl
Things I’ve learned from watching horror movies


• I learned that if the house آپ are living in tells آپ to “GO AWAY,” do it. Now.
• If you’re a virgin, stay that way.
• If a killer with a چھری is chasing آپ around the house, do NOT go upstairs. Go out the front door, آپ idiot!
• For God’s sake, turn on the lights.
• Never تقسیم, الگ کریں up.
• Never stoop over to see if the killer is dead. He’s not.
• Never get naked in front of a window.
• Avoid the following geographical locations: Amityville, Elm Street, Crystal Lake, Transylvania, many islands, lover’s lanes, most secluded...
continue reading...
8
15 BEST Excuses for falling asleep at your ڈیسک
posted by iluvsmj
15) They told me at the blood bank that this might happen.

14) This is just a 15 منٹ power nap like they raved about in the last
time-management course آپ sent me to.

12) I was meditating on the mission statement and envisioning a new paradigm.

11) This is one of the seven habits of highly effective people.

10) I was testing the keyboard for drool resistance.

9) I was doing a highly specific Yoga exercise to relieve work-related stress.
Are آپ discriminating against people who practice yoga?

8) I was doing a "Stress Level Elimination Exercise...
continue reading...
5
Cleverbot is a Stalker, Among Other Things...
posted by Spinner13
[b]Thought I'd post bits of a really far-wandering conversation I had with Cleverbot. I'd post it as a picture but I couldn't figure out how.[b]

Cleverbot: But آپ کہا I would never be the boss of you. Why did آپ change your mind?

User: I did not. And آپ are incorrectly stating what I said. Perhaps آپ have me confused with someone else.

Cleverbot: Only if آپ have an evil twin who is pretending to be آپ on your website. Are آپ sure that YOU'RE not suffering from Short Term Memory loss?

User: Oh my god! Evil Twin Cheryl is back? I told her to stop using my website!

2. In the memo field of all your checks, write "for sensual massage."

3. Specify that your drive-through order is "to go."

5. If آپ have a glass eye, tap on it occasionally with your pen while talking to others.

6. Amuse yourself for endless hours سے طرف کی hooking a camcorder کی, camcorder to your TV and then pointing it at the screen. <

8. Push all the flat Lego pieces together tightly. 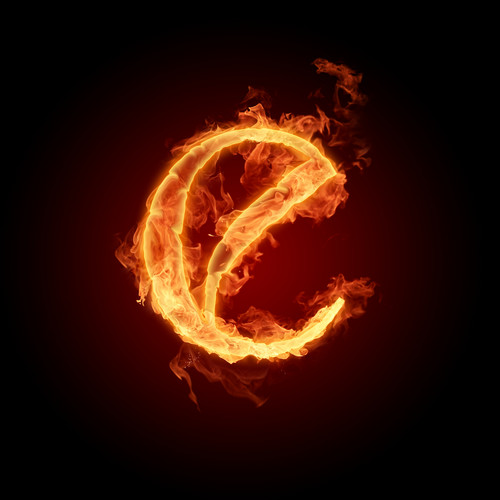 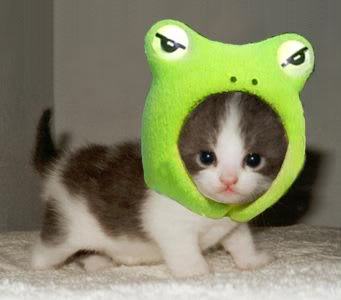 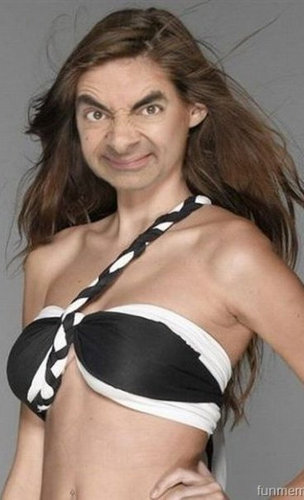 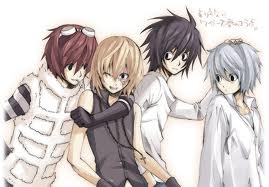 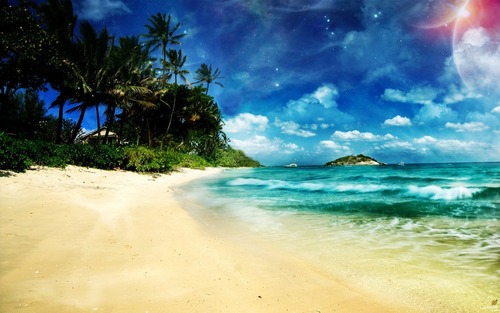 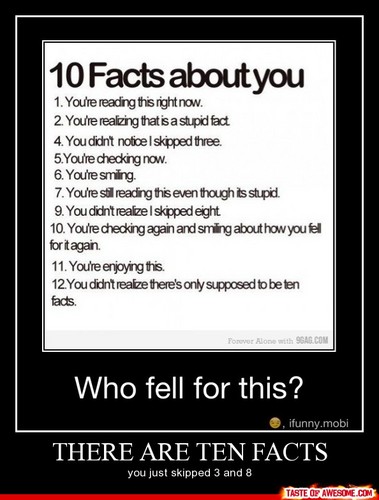 6
facts about آپ
added by liakarad1 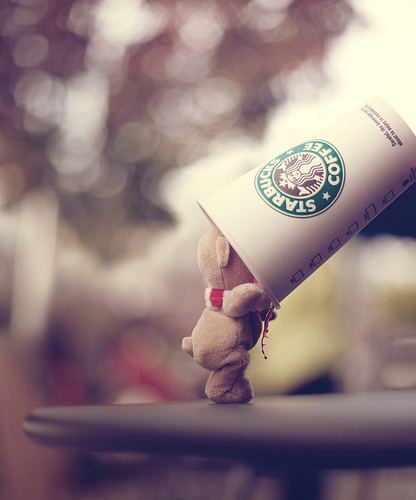 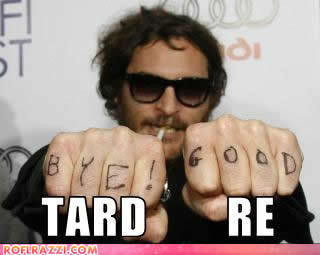 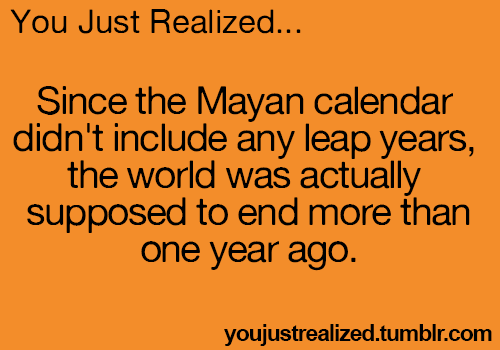 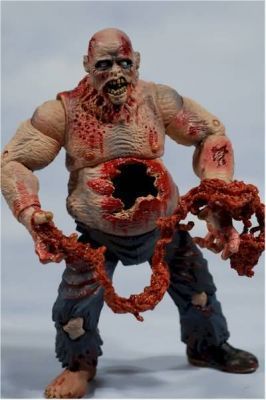