پہلے زیادہ سے سال ایک pokerface22 said…
Gaycheese, before you post anymore reasons, tell us this:
1. Where are the bad guys in Twilight, and why are they bad?
2. For SMeyer to be considered a good writer, she has to have a plot, realistic characters, etc. Answer these for me:
-What character flaws do all the characters have, and you MUST include every character?
-Tell me what the plot is in each book.
-Tell me what the definition of Chagrin is, and when SMeyer used it correctly.
3. Tell me when a Harry Potter fan has ever tried to drown someone b/c they didn't like the books, or whatever bad thing a HP has ever done that was newsworthy.
4. Tell us what the F*CK Daybreakers is!
5. Then, at the end, you can post reasons that are NOT:
A) Opinions (e.g. bcuz edwd iz zo HAWT!)
B) Anything that you just answered up there ^ (e.g. resun 4: Teh vulturi hoo r teh bad guiz iz stil hawt.)

This was copy and pasted from the other discussion: Twilight vs. Harry Potter Debate Forum, and I'd really like you to answer them! :)

پہلے زیادہ سے سال ایک pokerface22 said…
Gaycheese-I learned fractions in the THIRD grade. Let me do the math for you: I learned it 8 years before you did!

Plus, my older brother is working on becoming a math teacher. There is a LOT of math in my house when he visits.

look it up on dictionary.com.

پہلے زیادہ سے سال ایک wotcher-tonks said…
^I would haaaate to be in your house when he visits then :O

پہلے زیادہ سے سال ایک pokerface22 said…
And gaycheese, I am still waiting for your response to be correctly English.

پہلے زیادہ سے سال ایک PotterForever said…
Yeah because everyone who is really good at math spells fractions "fractonss." Please go away no one is taking you seriously.

پہلے زیادہ سے سال ایک PotterForever said…
gaycheese where did you go? Were all waiting for you to answer pokerface's questions.

پہلے زیادہ سے سال ایک pokerface22 said…
^^ I actually like it. He's pretty fun. And since me and my younger brother (the only two still living with Mom) are younger than the grade he wants to teach, it's too advanced, so either he'll drop it, or we'll learn something new.

پہلے زیادہ سے سال ایک StarKidWeasley said…
racism. This just got serious. And fractions: 3rd grade. I am almost positive that you are a troll now. And because we are goblins, can we be the cool Gringott's king that can make swords and stuff? XD 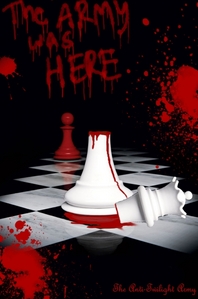 پہلے زیادہ سے سال ایک pokerface22 said…
PotterForever, I asked her to respond in correct English, so I bet she's taking the challenge. Plus, she's probably still stuck on question numero uno, because she can't think of a single bad guy.

پہلے زیادہ سے سال ایک pokerface22 said…
Ooh! What rank am I in the army???

پہلے زیادہ سے سال ایک StarKidWeasley said…
The Volturi wanting to break Eddie and Bella is a GOOD thing. That would save mankind from a cheesy, abusive romance. And that is an epic pic, wotcher-tonks.

پہلے زیادہ سے سال ایک Belvedere said…
I'd have thought she would've given up by now.

پہلے زیادہ سے سال ایک wotcher-tonks said…
Gaycheese didn't answer all the questions, but the ones she did answer are answered disgustingly.

پہلے زیادہ سے سال ایک wotcher-tonks said…
I will! This is gonna take a bit of time, I can barely read the writing.

پہلے زیادہ سے سال ایک StarKidWeasley said…
^ Good for you. I tried and failed. Ended up ranting, and it wasn't a good one either. I just deleted it. >.<

1. Because they broke the law! INVALID

2. This isn't each and every character. And now let me contradict:
Being shy isn't a character FLAW, it's a character TRAIT.
Jessica desn't talk too much, it's just that Bella never answers and Jessica is just trying to start a conversation.
Mike isn't annoying because A) We hardly ever saw him and B) The only time we did see him was when he asked Bella on a date.
Eric A) was pretty popular and B) not everybody can be popular, and it ain't a flaw.
Rosalie isn't mean, give me an example. She's just labeled mean, but Meyer tells, never shows. And she's depicted as b*tchy because Meyer is discriminative against blondes.
Because he's a vampire! It's in his nature, so it's not a flaw.
EPIC FAIL

3. Plots-
Twilight was the best out of the four, but it still sucked.
New Moon was suicidal and showed that Bella really can't have friends.
Edward wants to marry Bella? How is this bad? And I only remember her mentioning this a couple of times. Not a plot.
Breaking Down (first of all, I approve of the spelling on this one!) Bedward have a baby.... Not a plot.
Chagrin- synonym: shame. NOT SAD!
Plus, you forgot to add when it was used correctly!
INVALID SO IT"S A FAIL!

4. ????? When was Harry Potter naked? If you're talking about Radcliffe in Equus, then STFU! That was the actor, and if he was acting and had to do it, then it wasn't bad! HORRIBLE EPIC FAIL!

5. Wait a minute, why are we comparing vampires to Twilight? There are no vampires in Twilight!

Sweetie, next time, WRITE IN REAL WORDS! HOW MANY TIMES DO I HAVE TO SAY THAT?

پہلے زیادہ سے سال ایک pokerface22 said…
Twilight has potential. It would be better if it was rewritten by anyone else (speaking of which, I'll be rewriting it on fanfiction.net) and fans who the majority of weren't phsycotic trolls rampaging the internet.

The Volturi are not bad. They suck as bad guys. All they do is sit around in their big fancy thrones and...do nothing. Really.

Being shy is not a flaw. Talking to much? I don't recall Jessica ever talking to much. Bella probably thought she did, but Bella only ever wanted to talk to her precious Edward. Mike was not annoying. He was being NICE to Bella on her first day in school. Bella said he was annoying because she can't be bothered by anyone. Unpopularity is not a flaw. THAT is shallow, right there. Rosalie was mean to Bella because she felt as if Bella was threatening her family. Wanting to suck Bella's blood wasn't a flaw, Jasper couldn't control himself.

These are pretty much all events. (Lol at braking down) Chagrin doesn't mean sad, it means annoyance or embarrassment I believe. And you failed to point out when Stephenie Meyer used it correctly.

Harry was not. Daniel Radcliffe (the guy who portrays Harry in the films) was almost naked (he was wearing boxers) for a role on Broadway. He had to. I don't even know where that came from...

4.daybrakers is a movie abt vampyrs who burn in the sunlite. its scary wich is y tw1lite is more 4 kids.

Twilight is NOT NOT NOT for kids.

No, they don't. Bella loves Edward because he's "hawt" and Edward loves Bella because she smells good. That, gaycheeese, is called lust.

Sorry it's late, my brother had to use the computer :S

پہلے زیادہ سے سال ایک gaycheese said…
Because they broke the law! INVALID
so????? braking the law duznt make u a bad person
Eric A) was pretty popular He is in chess club so hez a nurd n taht makes him not cool
Rosalie isn't mean, give me an example. Rosalie is mean!!!! she doesnt lyk 2 talk 2 bella n dosnt want 2 help her

پہلے زیادہ سے سال ایک pokerface22 said…
It's alright Tonks. Thanks for fighting alongside with me in our army. And my question was still never answered: What rank am I?

پہلے زیادہ سے سال ایک wotcher-tonks said…
Okay, gaycheese? They. BROKE. The. LAW. You may not be a bad person if you broke the law, but the Volturi don't care if you're the nicest person to grace this Earth. If you break their law, they're out to get you.

Okay, Eric was in the chess club. They MUST mean he's uncool. You are very shallow, you know that?

Rosalie is not mean. I wouldn't want to help or talk to Bella either. If she was a threat to my family, I'd rip that bitch to pieces.

She was saying Twilight had the best plot, not that it was the best.

It was in the news because he was on BROADWAY. IT IS NOT BAD.

Twilight doesn't have vampires, what are you on about? They sparkle, drink animal blood, and live in the woods. Sounds like a fairy to me!

It kind of does... INVALID

And you like Twilight, so you must be dumb. See? I can stereotype too! INVALID

Maybe she isn't talkative. Maybe she doesn't know how to help Bella. Give me a specific example.

Out of the four. Don't twist words around, especially since everyone can go back and find that you can't read.

Just because it was in the news, doesn't mean it was bad. I remember reading in the local newspaper one day and it said it was Chicago's talk like Shakespeare day (e.g. use "thou" instead of "you"). That wasn't bad news, just something that you could do that day.

Really? Tell me the traits of all those vampires. Answer these questions:
Can they turn into a bat?
Do they have fangs?
Do they combust in sunlight, so they have to sleep in coffins?
How do you kill a Twilight vampire?
Do they drink blood?

پہلے زیادہ سے سال ایک pokerface22 said…
wotcher-tonks:
WHOO! What should our Anti-twilight army be called? And I don't know military ranks, either. :P
You're arguement was well written, grammatically, at least, compared to Gaycheese.

I'll answer the questions for you:
Can they turn into a bat? No.
Do they have fangs? No.
Do they combust in sunlight, so they have to sleep in coffins? No, they sparkle like the idiot fairies they are
How do you kill a Twilight vampire? Rip it up and light a fire.
Do they drink blood? Yes, but there are two types of vampires, apparently. We have the regular carnivores, only drinking animals, and the cannibals, only drinking humans.

If it were a vampire, the answers would be this:
Can they turn into a bat? Yes.
Do they have fangs? Yes.
Do they combust in sunlight, so they have to sleep in coffins? Yes.
How do you kill a Twilight vampire? A stake to the heart, a cross, or garlic. (all I can remember right now..)
Do they drink blood? Yes, any blood they can get.

She is really p*ssing me off right now.

Yola? Anyone home? gaycheese? Are you going to respond?

With what? What am I wrong about?

پہلے زیادہ سے سال ایک Belvedere said…
Actually vampires originated as creatures of folklore, but it was Stoker's Dracula (1897) that has provided the most popular basis for vampire fiction.

پہلے زیادہ سے سال ایک pokerface22 said…
I went to Amazon, but they said 1986 or whatever. Still beats Twilight, though.

And yes, Mr. Stoker definitely beats Twilight, by about a hundred years.
Previous
Something to say? Sign in with one of these options:
Log in to Fanpop! Not yet registered? Create a new Fanpop account!