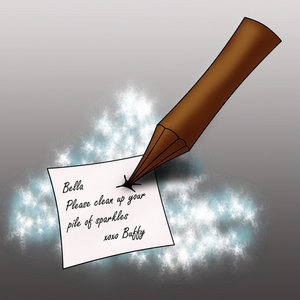 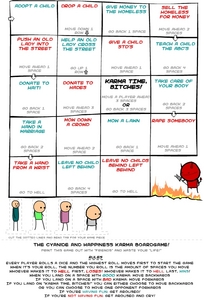 پہلے زیادہ سے سال ایک wotcher-tonks said…
Hm. I haz never played that. But I have to go feed the dog, so buh-bye.

I haven't visited their site for aaaaaaaaaaages 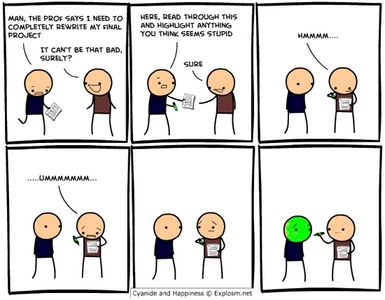 I'm probably the only one who acutally looks forward to hearing what gaycheese has to say. I just enjoy seeing all the Twi-fail from her.

PS, Remedial math 4 smart people? I told that one to my parents.

پہلے زیادہ سے سال ایک pokerface22 said…
1. Opinion, and a shallow one at that!

2. You haven't read it, so STFU. Voldemort goes after Harry Potter, and Harry Potter has to kill him. I'm tired so I will have a better, revised arguement.

5. (Your numbering is off yet again!) I was able to understand it perfectly. Plus, you have revealed that you're taking remedial math. I think remedial english, too.

7. Opinion. Reasons have to be facts, not opinions.

8. Not every book has a preface. And the prefaces in Breaking Dawn led nowhere. Jacob: "Life sucks, and then you die. Yeah, I should be so lucky." He never dies! WTF! And they were introducing the story.

9. They don't, but Edward and the Cullens do. Siriusly, (hehe, i just had to!) give me an example!

You said that the only book you ever read was twilight on your profile. Read Harry Potter. Then come back!

I'm gonna try writing in the style of PotterForever because I find his...retorts admirable.
1. That is not relevant to story quality. Besides, the twilight guys are no hotter than the harry potter guys.
2. Of course there is a plot, JK Rowling planned things over a story arch so moments from each book would be important. Meyer only creates sequels with little continuity.
3. That is your opinion. Opinion does not count in debate.
4. NO LOVE? I almost peed my pants seeing that. Love plays such an important part that I really don't want to go on and on about right now. Twiligt is not about love, it is based on attraction.
*5*. So what if it's British? It's still easy to understand, and if you don't look it up. Common sense these days.
6. That comment is too much of a joke. You'll find about a hundred HP fansites and maybe 20 for twilight.
7. Again, opinion.
8. Big woop if Harry wasn't the big star. It was just an introduction to his story.
9. They only break the rules when it is a life threatening situation. Because of that, they're even rewarded and still get punished when deserved. If I remember, Eddie and Bella also broke the rules willingly just to have sex.
Tsk tsk.
Thank youu for displaying the real attributes of a hardcore twilight fan. But hey, you can keep playing.

پہلے زیادہ سے سال ایک StarKidWeasley said…
Edward wasn't the big star on the first page of HIS book either, was he??

پہلے زیادہ سے سال ایک Belvedere said…
Not only is there a lack of Romans, but *GASP* there's a lack of Greeks too!

4. THAT'S what I was forgetting! My signature "IT'S NOT LOVE, LUST!" rant!

5. There's this thing I read once, and it was an article. Headline? R.I.P Common Sense.

6. Go to stephaniemeyer.com. It's for sale. I have a thetwilightsaga.com account, but I'm barely on there now that they don't allow us the freedom of writing whatever we want. Name's Reggaeh on there.

پہلے زیادہ سے سال ایک MaximumRide12 said…
Oh wow, I can't even respond to most of those, and the rest everybody else covered. Sorry if that seems mean to the rest of u guys, but thats just how I feel. :/

Yay! I'm forgiven! Next time I will write a debate. I swear on the River Styx!

SNL is hilarious, but I hate commercials!

پہلے زیادہ سے سال ایک GemonkDruid said…
I... missed out. But whatever. I got something better.

پہلے زیادہ سے سال ایک Gred_and_Forge said…
I'm still waiting for my email from them though. This is going to suck.

What did you get niece?

پہلے زیادہ سے سال ایک Gred_and_Forge said…
Oh, so you did get the gun?! Wait. Gun? No plurals as in guns. Where's mines?? x]

I dunno, which Killjoy do you like the most?

پہلے زیادہ سے سال ایک GemonkDruid said…
Do you like...

Saturday night live! X3 im back from daytona! And ive counted. Ive been to wwohp 6 times including opening day

پہلے زیادہ سے سال ایک pokerface22 said…
You are lucky gred and forge. I have a question. Can we still get into Pottermore? Or is all hope lost and we have to wait until Halloween?

Hahaha thankssss and thnak you too everyone who beat off gaycheese while i was away! :D

پہلے زیادہ سے سال ایک SEEKER6 said…
Can someone explain to me what pottermore is?

^ It's supposed to be an online reading experience of the books. I imagine it will feature illustrations of moments in the books as well.

پہلے زیادہ سے سال ایک pokerface22 said…
WHOO!
Sorry I am currently eating breakfas in a restaurant.
Pottermore is a site created by j.k.rowling. well she had something to do with it. i cant really tell you because i havent seen the video in a long time.
Go to pottermore.com and watch thevideo on the left side.
Sorry I am typing from my Kindle so my punctuation will suck because I am just too lazy to open up the symbols tab.

پہلے زیادہ سے سال ایک xDark_Angelx said…
I didn't get in either. But I might have a chance tomorrow night.
Previous
Something to say? Sign in with one of these options:
Log in to Fanpop! Not yet registered? Create a new Fanpop account!