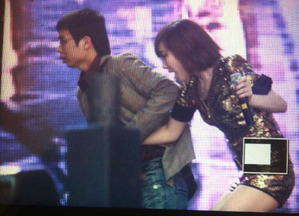 On April 17th, SNSD was met with an unfortunate accident involving a male audience member who trespassed onto their stage at the “Angel Price موسیقی Festival” at the Lotte World ice rink.

Towards the end of their performance of “Run Devil Run“, a male audience member intruded on their stage from the back and attempted to pull Taeyeon away سے طرف کی grabbing her wrist.

Just as in the first song, Taeyeon also melancholy in the Rain. In the video clip duration 3 منٹ 49 seconds, the former lover Baekhyun "EXO" it seemed to put a sad face.

Meanwhile, Rain is a song that brings jazz and soul that lriknya tells the story of love in the memory of the past. Puddles that appear throughout the video clip is like the memory of an old love it.

Rain song belongs Taeyeon is part of the project belong to SM Entertainment SM Station. Through SM Station, the agency which also administered Super Junior will release one song every week sung سے طرف کی their artists for 52 weeks.
Taeyeon's 'I' Solo Debut Earns Her The Most موسیقی دکھائیں Trophies In 2015
posted by demmah 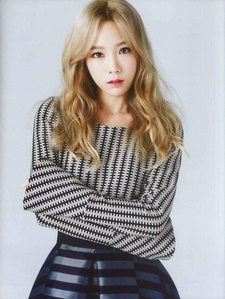 
Among her K-pop idol peers, the Girls' Generation member received the most network موسیقی دکھائیں trophies in 2015.


The idol was very active with موسیقی promotions this year, having comebacks with Girls' Generation and TaeTiSeo, as well as making her solo debut.
"Thanks for all the love and support that I received, I could sing with great joy," کہا Taeyeon, as reported سے طرف کی K-Pop Herald. "I can’t forget 2015 since I actively pursued my musical career as a member of Girls' Generation, TaeTiSeo and also as a solo artist." 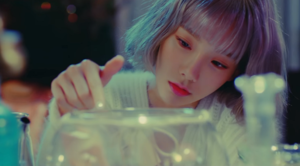 
As previously announced, Taeyeon became the first artist to be contributing to the حالیہ projects SM entitled 'STATION', where SM Entertainment will release a digital single from their artists every week over a period of 1 year. In the موسیقی video teaser, Taeyeon looks sweet with short hair, looks a bit half-conscious with the addition of a reverse effect. The song 'Rain' sung سے طرف کی Taeyeon is scheduled to be released in February. Immediately see a video teaser below! (www.kpopchart.net) 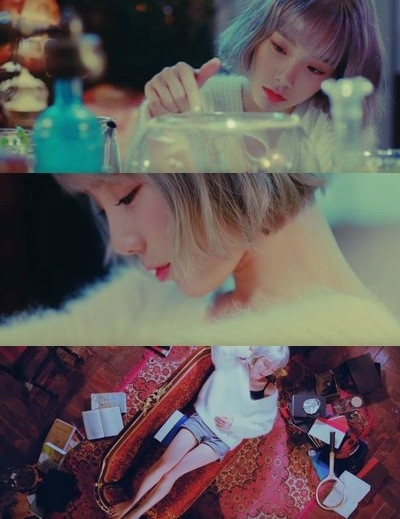 Naega babo gataseo
Barabolsu bakkeman...
continue reading...
SM Reveals موسیقی Video منظر پیش for Taeyeon’s ‘I’
posted by demmah
The منظر پیش for Taeyeon’s “I” موسیقی video has been released. For the past few days, Taeyeon has been releasing teaser تصاویر through her Instagram and official website.
Taeyeon’s first solo mini-album can currently be pre-ordered through various online retailers, including YesAsia (poster in tube, no poster), KTOWN4U (poster, no poster), KPOPTOWN, and Gmarket. The mini-album will be released digitally on October 7th.
Check out the موسیقی video منظر پیش on the SMTOWN YouTube channel, یا watch it below.
1
Taeyeon - The One lyrics
posted by mitsuki963
Swipge sangcheo batgo swipge nunmullago swipge apeudeon nal gieokhanayo
Jigeumdo geuraeyo yeojeonhi gatayo ireon nal bomyeon eotteolkkayo