Memories One-shot
posted by RichiYJ
Yup. It's a one-shot about Richi. Enjoy.


November 7th.....It was that time of سال again. I stared at the horizon as the sun gently climbed up, spilling its rays across the forest Higher and higher it went, until it finally rose to the spot at which everyone sees it at as they climb out of their beds. Sighing, I leaped down from the tree, and landed on the cold ground with a soft thud.

I walked slowly to the forest's edge, mentally creating a shopping فہرست of the items I need from the market, when an arrow zoomed so close to my face, it cut me as it flew past me and embedded itself in the تنے, ٹرنک of a tree. Only one of my enemies could shoot with such accuracy and power, and that same being stepped out from his cover in the bushes to face me.

"After my head again, I see!" I call out in a cocky tone. Kastial simply grinned. "Of course, your head is worth billions in the Fallen realm. You'll be able to provide me a nice afterlife until my sentence is repealed."

Kastial was a tall fallen angel, with a muscular body and short silver hair under a black and dark-grey hat. He always wears a long dark-grey کوٹ on his upper body, and the same color jeans on his lower body, with a silver pendant around his neck and a ripped, red headband around his forehead. His left arm was completely dark grey up to his elbow, and he had a grey bracelet around his right wrist. On his back, where his wings usually were, was nothing but a skeletal copy of what used to be there. In his hands, however, was a long, black archer's bow.

As I looked at his outfit, the only thing I could think of was that he needed مزید color to his choice of clothes.

My body began to shine brightly, and as Kastial looked away to avoid being blinded, I magically switched to my battle costume, and pulled out both of my daggers, holding them both upside down.

Kastial and I both stared at each other, both of us waiting to the other's attack. Kastial took the first move, quickly ہے رہا ہو لوڈ his bow with a silver arrow, and fired.

I easily dodged the arrow as it streaked over my head harmlessly, and I began running toward him. He abandoned the bow, and in his hands appeared a large, two handed sword, which he swung as I got closer. I deflected the strike with my left dagger, and held the blade there as I struck with my right dagger.

With no choice but to jump back to avoid the blade, Kastial dropped his sword and back-flipped away, summoning a one-handed sword and a shield to continue fighting me with. I glanced at the position of the sun, which was already directly above the land.

Cloaking myself, I quietly ran up to Kastial while he looked around aimlessly, swinging his sword through the air in front of him everywhere like a maniac. I uncloaked right behind him, and took a swipe right in the middle of his back. I cut deep into his skin, and black blood flowed out from the wound as he yelled out in pain. He spun around faster than I anticipated, and swung at my neck. I ducked to avoid decapitation, but failed to see the foot speeding toward my face.

I went flying,and skidded across the ground for several feet before rolling to a stop. Blood flowed out of my nose. The jerk broke it!

"This has gone on for too long." I mutter, pushing myself off the ground. As if he could hear me, Kastial yelled " I agree. It's time to collect my bounty!" And ran toward me, licking his lips in anticipation.

No time for the stronger ones, I thought, and I placed my hands flat on the ground. My left eye went dark, and in my mind I searched for the being I needed. "I summon thee,my faith banshee!" I yelled, Kastial still running towards me. A black portal opened up in the ground, and a banshee, smaller than the one I had summoned in the alley that one night, floated up from the Underworld.

Standing up, I pulled my daggers out once مزید and commanded the banshee to begin wailing. With a horrifying screech, the banshee's voice rang out through the forest, and Kasitial collapsed, desperately trying to block the wailing. "Stop!" he yelled, barely audible as the banshee continued. I ran to him, with the intent of sending him to the Underworld. Before I could get near him, he stood up, his hands still pressed against his ears, and he faded.

Sending the banshee back, I quickly checked the time once more, and saw the sun dipping past the horizon once more. I dashed to the market, glowing brightly as I switched clothing once more, and barely made it to the cashier with my items.

I leaned against the tree, my stomach filled with the سالن, کوٹنا I had just made. I gazed up at the sky once more, feeling content that I had kept the promise we had made to each other the دن before I left Heaven. I pulled the ہار out from my jacket, and opened it to look at the picture of her once more.

"Elizabetta," I کہا to myself with a slight Italian accent, "did آپ remember too?"

I gazed at the moon once more, until I drifted into my dreams. 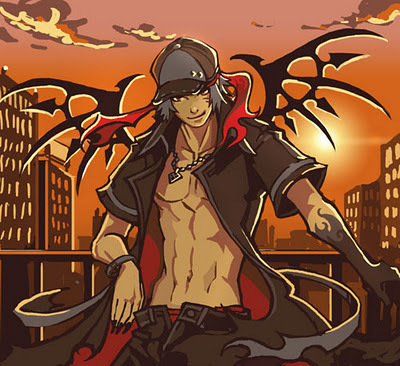 Kastial
SilverWings13 Oh. My. Gerbils. Epic fight scene + awesome fallen angel + romantic foreshadowing= greatest kick off for an OC ever! This is wicked!!
Red-Revenge Silver is right. Totally right. Only thing I have to say is I think Kastial should be some sorta flirt who tries to use her looks and charm to take him down. Just saying. Ask Sil about Alek being Russian.
RichiYJ ...Kastial is a dude? Or are you asking to change Kastial into a woman?
SilverWings13 66, one question: WTF????
Red-Revenge Asking to change him into a girl. Names very feminine...at least to me. *shrugs* I'm wierd. Also, I'm ordering a full fledged story from you. *points AK-47* Clear? And another thing since you're new: I'm the only guy on here.
SilverWings13 Nuh-uh! Twan's a guy!
RichiYJ *raises hands* I'll see what I can come up with. Why does everyone seem to have an AK-47?
Red-Revenge BECAUSE IM FROM THE USSR COMORADE!!!!! Sil: Who is Twan? And if you aren't telling your friend to read Double R....that's best left unsaid.
SilverWings13 I not telling anyone to do anything. Okay, that's a lie, but I'm not about things like that. And Twan is Gunfire's creator and a dude. And I have an AK-47 cause it's apparently its better for defending yourself in a zombie apocalypse than a flamethrower.
Red-Revenge Ooooooookkkkkkkkkkk....... *turns to Richi* *waves hand* You will read my books
RichiYJ Oooookay...... I'm just gonna leave now. I'll read them later..... *Runs for his life* AHHHHHH!!!!!!

Becca
added by Robin_Love
11
Character makers online!
posted by AislingYJ
Updated 6/3/14
I'm bored, so I thought I'd share with آپ a few websites online that آپ can design your characters! There are tons of websites out there, these are just a few.
link
This website is سے طرف کی far the best superhero generator I've found. Basically آپ use it to make your character in costume. They have endless options of costume parts for both male and female characters, and they even allow آپ to اقدام parts around, resize them, and color them. آپ can save the character to the game, and then load it later, but if آپ want to save an image to the computer, آپ have to take a screenshot....
continue reading...

Improv Civvies
Biking across Gotham certainly took much longer than driving. But it was also faster than walking. And Aryess wasn't in the mood to break the law سے طرف کی driving her موٹر سائیکل, موٹرکیکلانگ while underage, even if she did have a (false) license.
Ary didn't mind the long ride. It was a nice way to clear her head in the simple task. She could have gone without the heat, though. The beating sun had forced her to exchange her hero uniform for not her usual civvies: blue-and-gray striped shirt, hooded jean jacket, and jeans, but instead a spaghetti-strap سب, سب سے اوپر and black shorts. The fingerless gray gloves stayed in...
continue reading...
Wha Could Have Been... (Red Revenge Halloween Special) --SLIGHT SPOILER ALERT--
posted by The_Writer
What Could Have Been...

(AN: Yah, here's my Halloween Special. I thought it was different than what other people would expect from me. Besides, I need to do something happy. Cheers!)

Holly glanced back through the bedroom at Sam who shook his head before pointing to his watch.

"No, I'm sorry Lily. I'd love to come but daddy and I have a very...important errand to run."

1
Eclipse in one pic :)
added by robins-gfriend
Source: Eclipse-Omega symbol

Brette and Connor
added by Hot_ShotYJ


As آپ may have seen, Bakes and BelovedRobin have been engaging me in a battle over morals. I will kindly ask آپ to judge this argument for the betterment of the world. If آپ do not wish to. Stop reading here and خارج this message forever. Take no part in a moral battle of right vs wrong. But it is up to آپ to determine what is right. And what is wrong.

OOC: This is a one-shot that me and robinluv14 wrote together. We were really bored so this is kind of insane. Like really insane. It’s really random, and not on the timeline of our other stories یا the rest of the wall. Which is why Fin is alive and Delta isn’t a traitor and all that. Well we wrote most of this before the Delta thing. We were just too lazy to finish it and post it.....Well I’m rambling, as usual, so here. Read. If آپ dare.

The sun had set, and gray dusk had overtaken Happy Harbor. Most of the team was piled in the cave, in the lounge, the kitchen, یا in their respective...
continue reading...
Mercy جوابات Random Questions! PART 1
posted by MercyYJ
Nicknames?
Merce, Mercy, Bells, Bellie, Bell

Where do آپ live?
Wherever I want!

Hair color?
No matter what anyone says, I am a orange-head-- NOT a redhead!

Eye color?
Blue-- Depending on the light!

Date of Birth?
The past irks me... So, I'm not quite sure! Sometime in February maybe?

What's your سٹار, ستارہ sign?
I have no idea what that is!

Element?
Fire. All the way!

How many siblings?
2 twin brothers- Deceased.

"She cut them in three pieces and set آگ کے, آگ to their car." Revenge replied, and swung off.

"I assume آپ did your homework?" Revenge asked.