Spirit in the Warrior
posted by Robin_Love

Nurse Becca
It appeared to be night سے طرف کی the time her eyes had opened. Everything seemed stranger; slower. She tried to اقدام her hand and found herself strapped down. She started to panic, eyes looking for anything within her grasp to help release her arms. She let herself relax when she saw a friend in the corner, eyes closed, but at peace and alive. She had no real idea if it was because she was held down, but she couldn't feel much. The constant buzz in her head had disappeared, along with the reality of time, it seemed. There was something going on but she relaxed and breathed in deep breaths. Her eyes shut once more, her overused brain recalling what had happened before she had woken up here. I had been in my room at headquarters.......down south. Something disturbed the alarms. A-a...some thing. And then....the electric circuits were flooded. I was in there....with Valen! She tried to sit up and was whipped down سے طرف کی her restraints with a maddening 'thunk'.
“Ow...”
“Erin! You're up.”
She looked to the eyes belonging to her partner and co-leader.
“Where am I?”
“In a hospital. After the circuits were flooded, آپ were found in the room with Valen. He's fine سے طرف کی the way. Don't be disturbed....but you've changed. And you're powers...are not the same.”
“What....? I don't want....what?!”
He smiled at her.
“Why am I restrained?”
“You kept trying to اقدام when they ministered medications.”
He looked at the restraints and she felt them drop free.
“Thanks, K.C. Now...what happened with my powers?”
“You're speed, I'm guessing, was changed with the electricity and water mixing together. After all, آپ did get them that way.”
“So....I have...no powers?”
“None related to the speed force, no.”
“But...I have them?”
“Yes. آپ still have mutant DNA, we're just not sure what they are.”
“I do.”
They both looked to the door to the nurse standing in the door.
“Becca!!! What are آپ doing like that?!”
“K.C. He thought it would be “great fun” for those who were wounded. Anyway, I've been running tests. You're blood is...very active, still. It's got a wild side to it.”
“How's that?”
“Your strength seems to have increased immensely. And آپ have a strong combative instinct. My theory is آپ may have been bonded with a water golem of some kind.”
“A gollum? Like Lord of the Rings?”
“No. Golem. Nature spirit. Though very volatile.”
“And I bonded with one...why?”
“Well it's life was probably going to be expended. It clung to the nearest thing.”
“Great. Anything else?”
“Yes. You've been retracting and detracting a pair of wings. Sometimes a tail; a demon's. Those features can be marked سے طرف کی a golem. And آپ have some water properties.”
“..Liiiiiike?”
“Well آپ seem to absorb water on آپ rather than...not. And آپ can survive in water terrain. Oh and آپ can control where it goes. So آپ do not have water-bending, no. آپ have some traits though.”
“Wow. So....can I see what I look like now?”
With a small nod, Becca handed her a mirror.
“Take a look, Valda, spirited warrioress.”

Valda (Erin Summers)
SilverWings13 Oooooh, fancy new powers!
DiscordYJ ((woah...this was pretty sick <3 ^-^ I love Erin's new look and powers ;3 ))
Robin_Love I do too. And she was needing a few changes so I just went with this. I'm glad the story was good. Wrote late last night so I didn't think it would be any good.
killer24 (Thanks the Gods I wasn't the only one thinking about Lord of the rings) Alex: "FISH!, also sucks to be her" (he means it was a cool story and hopes to read more about this dilemma) Alex: "no I don--" *gets put in a box*
Robin_Love XD
1
Tale of Legends
posted by Robin_Love
His raven hair dripped crimson blood to the mistreated battle field. The spear had long been removed from his head but the bleeding went with the hours that had passed in useless war. His breathing was slowing; he could hardly see the outline of who had been his king through his icy blue eyes. It was a bloody fight, all lives lost except his and his king's. Now, he fought off the clouding death penetrating his senses.
“I had hoped for better with us.”
He smiled sadly at the word's his uncle spoke.
“As had I, my lord.”
“You tried to overthrow me and kill me. Treason is cause for death....
continue reading... 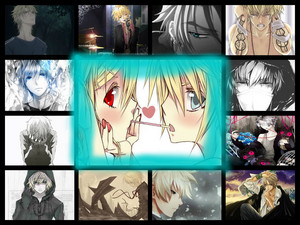 SOME OC couples! ;D That I ship! (I know I didn't mean to spam!!)
added by SouthYJ
Source: TUMBLRR!!

Blood flooded from her mouth as he held her close. He was willing to be the barrier between the girl and the silver bullets whizzing past them. So far he was doing good, suffering only minor scratches from the brush he was plowing through.

But the girl? She suffered a shot to the shoulder and stomach. The skin was bubbling up like a burn and her coughs were becoming مزید faint as the red liquid, she needed to...
continue reading...
2
Self-Control
posted by DiscordYJ 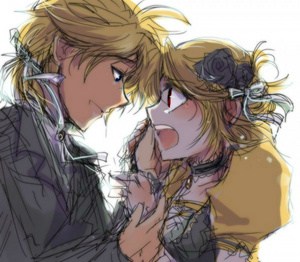 This thing doesn't want me to love, its selfish. Blade. I'd kill it before it touches her. She makes it angry, uncomfortable, envious. If I gave it a chance, which I never will, it would kill her, rip her apart, and leave nothing left. She's scared, though she says she's not. I can feel the fear deep within her; I wish she wasn't, but it is glad she's...
continue reading...
3
دل of Fury
posted by Robin_Love 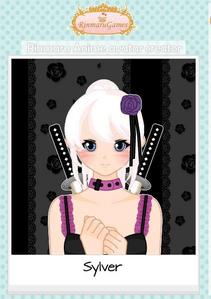 Sylver
The cool wind ruffled his blonde hair. His steps were fast and sharp. Many heads turned as he walked down the cobblestoned path, mostly female. His sunglasses reflected the sights of the old city as he moved closer to the meeting spot. He stuffed his hands deep into the pockets of his black trench کوٹ despite the warm sun. He turned down a side street, then another. Quickly, he looked around before walking into the shadows of the building. When he stepped out of them, he stood in the middle of a burned down building, rotting furniture and material littering the floor. He looked around slowly,...
continue reading...
Fangs~Part 10~
posted by BladeYJ
((Turns out I miss counted -.- and named almost all of them wrong.. silly me :P

The thirst keeps growing. It's like a hunger آپ can never fulfill. It sucks. I want it to end. I've fed a lot مزید since Dad, I still hate that he was my first taste of blood, but I do feel guilty feeding on those poor innocent people. I just don't want to die, in retrospect I don't want to have a never ending thirst. All in all , it needs to stop.

My fangs are bigger than before and it fucking...
continue reading...
1
Gone Away 12
posted by Robin_Love
He felt another prescence in the room with him. He half-hoped it was her, but he knew it wasn't. But the thing standing in the corner of his room wasn't what he expected. He made ready in case the thing attacked, but then he saw the eyes. They weren't the same color, the familiar blue, but they held the same pain and sadness and longing that his eyes had before.
“Terror.”
“Yes.”
“Did آپ find her?!”
“Yes. Becca's there now. We have to hurry.”
He stood and ran over to where the so-called monster stood. He felt the slight pressure of a hand on his shoulder and they stepped into the...
continue reading...
OC Poem
posted by InfinityYJ
What happens when I'm bored in History class? I start a poem where آپ guess who's who. Yay.

Think of when the team was small
Think of it right now
Remember the people, remember them all
Of their powers and how they were found

Imagine the black winged, black haired male (1)
His wife of angel’s kind (2)
Their daughter with a prophecy to never fail (3)
Their son with a strengthening mind (4)

A goddess among us controlling her wonder (9)
The...
continue reading...
Christmas Magic
posted by BeccaYJ 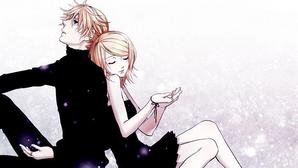 Terror&Blade
Not a two parter. So it will be answered


She woke up to the sound of light knocking on her door. She groaned, but got up. She yawned as she opened the door. Her eyebrows knit in confusion as she looked around.
“Strange. Could've sworn I heard knocking.”
She moved to close the door. Her eyes caught something on the floor and she stopped. Little blue rose petals. She smiled a bit and picked up the card that was leaning against the candle, surrounded سے طرف کی dozens of beautiful blue rose petals. She opened the card and smiled again. مزید rose petals. But these ones had words on them, arranged in a...
continue reading...
Because it was fun
posted by Robin_Love
He groaned as he was rudely awakened سے طرف کی his youngest daughter jumping on his bed.
“Ugh what?”
“Your com is going off. I'm trying to sleep.”
“Oh excuse me!”
Lexi ran back out of the room and he grabbed his com-link. Devin had been out on another mission the night before so he was hoping it was her to tell him she was on her way back.
“Hello?”
“Were آپ asleep?”
It was Silver's voice.
“No. My breath was even, my eyes were closed, and my brain was off.”
“Okay. Can آپ come to the mountain? It's kinda an emergency.”
“What did Mel and/or Jamie do now?”
“Uh...it's not them.”...
continue reading...
1
Mission Impossibal
posted by NekoTheif

Bonnie frowned into her cereal angry with life it's self. "Whats the matter?" Matthew asked as he bit into his ٹوسٹ "Momma's gonna have a baby they got back from the doctor yesterday کہا I was gonna have a little brother" Bonnie sighed "I don't see the problem" Matthew shrugged "Your a boy I wouldn't expect آپ to" she rolled her eyes.

"umm what's that suppose to mean?" he blinked confused at her ھٹی, ترش mood "I don't want a little brother they have me they don't need another kid" she snapped "I sense worry in your voice" Matthew answered plainly "My first parents had a baby 3 months before...
continue reading...
1
Trust No One
posted by Robin_Love
A little something to help set up another article. Enjoy! :)


She could hear the موسیقی from her spot in the kitchen. It was a soothing sound but odd to hear. Mostly because it came when no one else was around. They had all gone out to do something. And she was alone as it played. She followed to where she knew it would be played from. The sound haunting yet alluring and still so soothing. It was amazing and it intensified with every step closer she took. The sounds accelerating and crescendo. She looked in the small window on the door. Someone was at the piano, but she couldn't see their face....
continue reading...
Beast
posted by Robin_Love
Just something I thought of. I think it’s not quite yet a سال but the story came to me. Enjoy

The soft lullaby filled the room as the clock turned 2:00. The sun was tucked away to sleep, much like the girl in bed. A shadow crossed the room, coming closer. A sudden flash of metal, and the girl faced her intruder, claws out.
“You could have died!”
The ڈاکو, ہڈ fell away to reveal piercing icy blue eyes.
“I needed someone...”
The implication of his words caused her to lower her guard and sheath her claws. She made room on the بستر and he sat, staring into a dark abyss.
“Has it already been a...
continue reading... 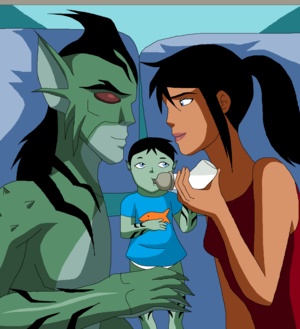