Have آپ ever heard of Victoria Medlin?

She was an actrees, altought not that famous. Victoria appeared in only three films, her most notorious work: Vanishing Point.

She dated Paul in the mid 70's, which I guess was around '74 since he had Carmen from '75 to either early - middle - یا late '76 (I think it was middle). Meddlin supposedly commited suicide in '78, there's also a rumor of an overdose for pills, but nobody really knows when, where, how and why it happened, just that she died in 2/27/78... Apart from dedicating his solo album of that سال ''to the people who have always believed and to the memory of JB Fields'', he also dedicated it to her.

Does someone here also know at least the fact that she dated Paul? This is not a thread KISS' یا just Paul's شائقین discuss a lot from what I see.


~ Have a great saturday =D 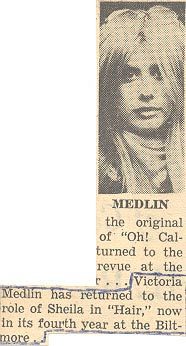 Well I originally asked this coz it seems like she's not mentioned that much سے طرف کی KISS' fans, which I find a little weird and want to see if there's anyone else that has heard of her.. Dunno, there's (almost) NO information 'bout her life یا her death x_O Although I didn't really did this سوال to become a topic, it would be a good thing =)
Ross98 posted پہلے زیادہ سے سال ایک