5
My سب, سب سے اوپر 10 Most Beautiful TD Girls
posted by DandC4evacute
I've been meaning to make this فہرست for a while now. My opinion has changed quite a bit, PLEASE don't bash my opinion, but don't just make تبصرے like, "good job", and stuff like that. Also, I just wanna say that I don't think ANY of the girls are ugly, they are passable at worst. And I think ALL of the girls on this فہرست are BEAUTIFUL. Okay! Here we go!
10. Izzy This girl is an underrated beauty. First of all I LOVE her long curly red hair, she has the best hair out of ANY of the TD girls! I also love her green eyes, if I didn't have blue eyes, I would want green eyes. Her smile is pretty...
continue reading...
You're Mine
posted by TDIfangirl
"Ugh! What is up with you?!" Heather snarled, annoyed that Justin was screaming at her for the third time that night.
"What is up with you? Why do آپ think Alejandro's so much better for آپ all of a sudden?" The male model yelled back.
"We're just friends!"
"That's what Duncan and Gwen said, and look at them now-OW!"
Justin held on to his cheek, angered. "What the hell, Heather?!"
"Don't آپ DARE involve her and her punk boyfriend in this. I'm not a harpy, unlike her."
Replied the Asian, annoyed. "If you're going to be a freakin' baby, then I'll waste my time with someone else!"

"Chica, are...
continue reading...
1
Total Drama ventran vs. Newbies Episode 2: Cliff Rage!
posted by TDHost56
Chris: Welcome back to TDVN! Last time we met the 44 comtestents and the teams. They are now heading to the cliff for their first challage! How will win a prize. Who will go home? All this and مزید on this episode of Total! Drama! Ventrans! Vs.! Newbies!

The group sat at the base of the cliff.

Chris: آپ must climb the ہل, لندن while Chef shoots at you.

The teams began to climb. Courtny decided to trip Gwen. Gwen fell leaving 43 left. Courtny laughed then she was shoot.

Rebekah: this challenge was really intense! And Trent helped me when I twisted my ankle?!?!?!?!? Where is this new Trent I haven't seen?!? I think Angie has really changed him into a better person :) I hope their relationship works out well! I should try being nicer to Trent and see if he keeps being like this. OH NO!!! LUKE'S TEAM LOST :'( I reallllly hope he doesn't get voted off. I havent even gotten to tell im how I feel about him...


Claudia: Me and Lucy make a great team! I hope we make it to the finale two.

May: Zams probobly going to get voted off. He's been being a jerk. *sigh*...
continue reading...
1
total drama simulation episode 7 toyko idol part 2/4
posted by sorandom15
everybody ahhhhhh

angie: Well, some are cannon-balling.


clay: Our lives begin to flash before our eyes!

Everyone: Cept there's tons we wanna do before we die!

may: Make it ہوم to see my momma!
lucy: Marry jazon!
luke: be a hero!
Lily: Be a writer!
zack: Corporate lawyer!
rebekah: Prom destroyer!
clay: Be a ninja with throwing stars!
jordan: Lion tamer!
zam: New food namer!...
continue reading...
2
Total Drama Reality Check! Episode 9 Part 1/1! "The Consequences of the Truth"
posted by BridgexJordan
Chris: Last time on Total Drama Reality Check! Our contestants went throw the most grossest challenge yet. They ate sheep's eyes, swam in cow's blood, and drank snake pee. Cole got black mailed سے طرف کی Draven, Layla got the confessional tapes... again, and Joss got the boot in a Mysterious circumstance since over half of his team didn't vote him off. hmm... should I look into it?
Chef: (shrugs)
Chris: Anyways, who will win? Who will lose? Who will cry for their mommy? Find out the answer to these سوالات and مزید Right here, right now, only on... Total... Drama... Reality Check!

So, I'm sorta taking a break from heavy writing and writing these cute little one-shots. If آپ watched TDROTI, the grand chef auto episode..Mike fights his personalities for control, that is sorta like this, only with Ally and her personalities..takes place when she is going to the hospital in "Words hurt, but starts love."

As I am lifted onto the stretcher and wheeled out if my blood stained room, I can feel everything crash around me. Seeing fresh and juicy blood on my بستر and the stinging pain in my right side. The paramedic crew Tumbles down the stairs...
continue reading...
1
"Regret something beautiful." Chapter 10
posted by SuperGwen
RSB10

The small آگ کے, آگ hall was filed with a million people. Many were common friends, family, یا old students from High school. Walls were decorated with colorful blue and گلابی streamers. A whole میز, جدول was over flowed with presents and gift bags. There was even a big banner up on the دیوار that کہا "Congratulations on your two little blessings!" with two rattles printed on the sides.

"Oh my gosh! A baby shower?! For me?" Ally says excitingly.
"So that's why آپ made me stay home! Just so آپ could surprise me!" She کہا to Mike.

The tanned boy...
continue reading...
1
Best reason why Heather is the best "Total Drama" winner in America
posted by HoldsteinSingh

Heather is the actual winner of TDWT.
1. She is the series' first Female Winner whose ending was seen on Cartoon Network.

3. She is also the only season winner who won using her own strategy. She manipulated Alejandro, and won TDWT.

4. She is the highest ranking contestant in the first generation episodes (2007-2010), competing in 66 episodes.

6. She is also the only contestant, aside from Owen, to make it to the Final 10, three seasons in a row without returning.

Chris:*walks up to the podium with مزید scratches and bruises* Well I've never had the pleasure of seeing both teams at the elimination ceremony before.

Gwen: Just get on with it Chris!

Alex: Seriously, I need to go see Gladys and آپ talking isn't getting me anywhere!

Destery: *is pulling his pants down, but then pulls them back up*

WARNING: This contains slash, as in a boy/boy pairing. DuncanxHarold. Don't like it, don't read it.

The video flashes on, revealing Duncan sitting at a chair in a room that's painted mostly black and green. He's glaring at the camera when he begins to speak.

Okay, so I've been going on fansites recently. Yeah, that's right-- fanfiction.com یا fanpop.net یا whatever the hell it's called. DevilArt and all that crap. I was grounded...
continue reading...
3
Her real name isn't Patrick!
posted by SlimShady34

Her real name isn't Patrick oh no she has got آپ fooled!Just pull up a نشست and i get آپ all even schooled!
*music starts playing*


She says shes 27 oh no but shes 34!She says she is rich but she can't even afford a door!Shes says she 110 ibs but oh no not even close!Shes 139 ibs and even thats not her most!She doesn't brush her teeth no insteed she wears a sphere!She says she clips her toe nails but i'm sorry my good Dear!HEY!
Patrick:HEY!Hey!


She chooses the same pears of skirts!One size 4 and one size eight so when she wears the bigger pair it'll look like shes lost weight!HEY!
Patrick:What I need the attention!

آپ think thats shes unny and you'll laugh at all her jokes,but look at thes 2 guys with there uglylittle cloaks they've been righting all the jokes all along!It looks like she has bown hair but she surly is naturally blond!HEY
Patrick:Not even gonna!

*Katie is crying*
*You can hear Natalie crying from the confessional*
Harold: agggggggg.......... first Katie and now Natalie???? How bad can this get?
Gabriella: how much water can Katie hold?
Wally: I don't know but If she crys much longer she...
continue reading...
1
total drama goth vs emo ep 1 part 1
posted by gothemo1234
chirs:hi everone welcome to goth vs emo oh look here comes lucas

tak:here it comes again we dont like each other were just friends

angel:wow its so great to be on tv دکھائیں but it became a nightmare because of these emo people

andrea:thanxs آپ guys might be the other people its great to see emo and goth people

Sadie: Hi I'm Sadie!
Katie: and i'm Katie!
Sadie and Katie: and this is the TDA aftermath show! Eeeeeeeeeeeeeee!
Eva: ارے dumbos! where's Geoff????
Sadie: Like oh my gosh. I don't know!
Katie: Billy told us to be the host!
Eva: I will be the host.
Billy: with who?
Eva: where's geoff?
Billy: Crying.
Katie: Like oh my gosh about what?
Billy: I don't know.
Josh: I know!
Sadie: Like oh my gosh! It's Josh from CMH!
Josh: Yes i am.
Eva: I'm آپ co-host! آپ got it?
Josh: ok!
Billy: so why is he crying?
Josh: have آپ seen Total draMA awsomeness??? Bridgette is cheeting...
continue reading...
TOTAL DRAMA PARTY chapter 2...love, and a درخت
posted by CourtneyGirl
ok again befor we start off i would like everyone to know if they where in the last one آپ are garenteed a much larger part in this one i promis, and of courtce if آپ havent sighned up and آپ want to here is the link i look at it all the time so just awnser this.
link
k so here we goo.....oh an p.s. nothing is going on in me an jakes relationship we are fine, if i say how i don't like him یا if i am going t cheet on him یا anything, i am not really going to its just to add up suspence for your amusment. k

I woke up this morning feeling مزید tierd than when i went to bed, i hate that feeling....
continue reading...
1
Total Drama Hunger Games part 1- The Reaping
posted by tdafan121
The Hunger Games. A battle to the death between 24 teens ages 12 to 18 from each of the 12 districts of Panem. In the center of the districts lies a shining Capitol, where its residents are free of all worry and can watch us die in peace. My name is Courtney Banks. I am 16 years old and I live in District 12, the smallest, most run-down district where آپ can starve to death in comfort. Most everyone here is poor, except the three Hunger Games victors who live in the lap of luxury in the Victor’s Village. One of the victors is very old and is usually drunk but the other two, who won 26 years...
continue reading...
1
Total Drama Island Bio's - Bridgette
posted by TDIlover4ever 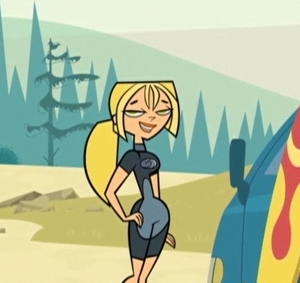 Likes: Hangin' ten on her surfboard

Known For: Her sense of humor and creativity

Why TDI?: To spread the cosmic love and body surfing

Bridgette grew up in a small west coast town. She was surfing before she could walk, and when she walks, the other surfers can't help but check her out. She may be as pretty as a daisy, but Bridgette's only coordinated on the waves. On land, she's kind of clutsy. She's been responsible for مزید than a few wipeouts on her surf team. (and they were all on land!) Luckily she's also got a healing touch.